June is a month in which thermal winds are already a constant in Mallorca.

Wind in Pollensa in June is the title of the blog entry in which we will see two things, the reasons which can be observed in the Pollensa bay coast in June, and how some people takes advantage of this pleasant weather situation.

Mallorca, it is located in an area of ​​the Mediterranean characterized by a deep and relatively warm sea, with surface temperatures that reach 24 º Celsius in June, at the same time than and abyssal temperature of around 10 º Celsius, which is an unique fact in the world.

The sea regulates the temperature and makes the thermal seasonality not as marked as in the Iberian Peninsula on the other side of the sea.  Mallorca is close to the European continent to the north, very cold in winter and Africa and the Sahara desert to the south, extremely warm.  All this affects the particularities of the climate of Mallorca.

To that peculiarities we have to add the thermal effect.  Embat is the name that receives in Mallorca the sea breeze.  A wind which originates locally by the diurnal heating of the land with respect to the sea. The air is heated on the ground and reaching a certain temperature tends to rise and create a suction effect that attracts the fresher maritime air towards the interior of the island.

What sort of winds we can expect in Mallorca in June? June is still receiving some NW-N-NE winds mixed with our much awaited thermal winds. If placing ourselves on the coast in the central part in the bay of Pollensa, we will observe this phenomenon.

The sea completely calm, like a glass at 9 o’clock in the morning. In the distance, a color change appears in sea between 11 and 12 o’clock, coinciding with that suction effect which creates the differences of temperatures of the air which is over the land and over the sea.

To that, follows the entry of the thermal wind which with its ups and downs can last until 17h in June, a little longer in July and August.

June 2016 – Mallorcan waters, Pollensa Bay.
There are some things that sooner or later have to arrive. Like the night after the day, like breakfast time every morning or like some visits to the toilette room along the day. But no, we are not going to tell about such unavoidable and unromantic fact as the rest room visits on this second part of our blog entry. 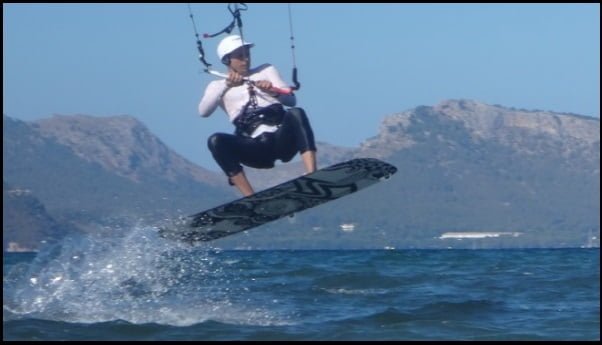 He is getting closer and suddenly he jumps

What this second part of this entry is about is regarding this constant in human nature: progression. Children will grow and become men. Trees will also grow and with its frondosity will offer us its shadow and … kite apprentices will also progress and one day or the next, finally will rise from the waters and will fly -shortly, of course- in what we could describe as a jump.

Eze is taking distance. Is he planning to jump again?

I was referring to jumping, this dreamed, desired, sometimes even overrated kitesurfing move. And who else to protagonize this little entry to our blog than our beloved kite fellow Eze. 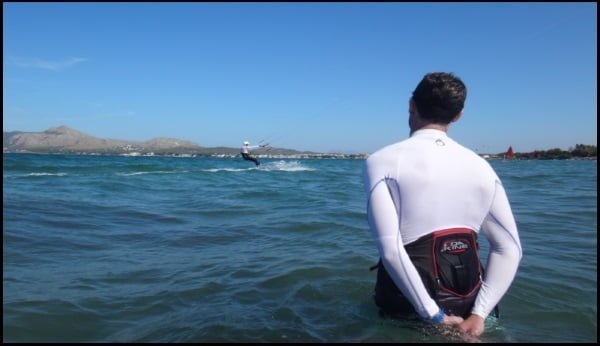 Yes, Eze is finally jumping, left aside insignificant minor details as style or landings, etc, However, Eze is starting to amaze us with his jumps, and … this is what really matters.

The few pics of our hero are a sort of homage to Eze’s striking jumps. You persevere … one day or another, finally, you’ll get it.

His flights, his hangtimes, his merciless boosts up in the air.  All of it, necessary  to impress kids and grandmothers who may be on the beach -if any- though, to be fair to the truth, there weren’t any.

and … last pic, or … when one is jumping at the Peaks high.

Eze’s progression it is evident to the eye, the human eye and any other living creature’s eye that may be lucky enough to witness his spectacular -rather humble, better said- air tricks. And … the few photos which adorne this blog entry will undoubtedly help to show to all readers and followers, Eze best efforts.