One afternoon, beginning of September.
Clouds in the sky start to show that changes in the weather are on its way. Beware!

Things could change rapidly, be ready and don’t get caught by surprise …

In Sa Marina, Pollensa bay, the kitesurfers and kite schools continue with their teaching activities perhaps indiferent yet to the incoming storm, as the weather change has not arrived there yet After several hours, the storm is already there, darkening the sky as a hard rain begins to fall. It will rain all throughout the night and during the next two days. Strong winds from North were blowing hard on the coast Once the storm calmed, the sea conditions still were showing its consequences, probably waves will be breaking all over the bay The effects of the storm in Pollensa Bay

The peak of the tide reached the buildings, stone walls and fences near the beach. Tons of posidonia were carried to shore As winds were still blowing, though with less intensity, some kitesurfers, bravely, returned to the beach and started the first kitesurfing rides visible in the last days When boats, some of them of considerable lenght, were carried away by the waves, as consequence of the fiercy winds that blowed during the storm, they reached the other side of the bay, more than 6 kms downwind of their original moorings 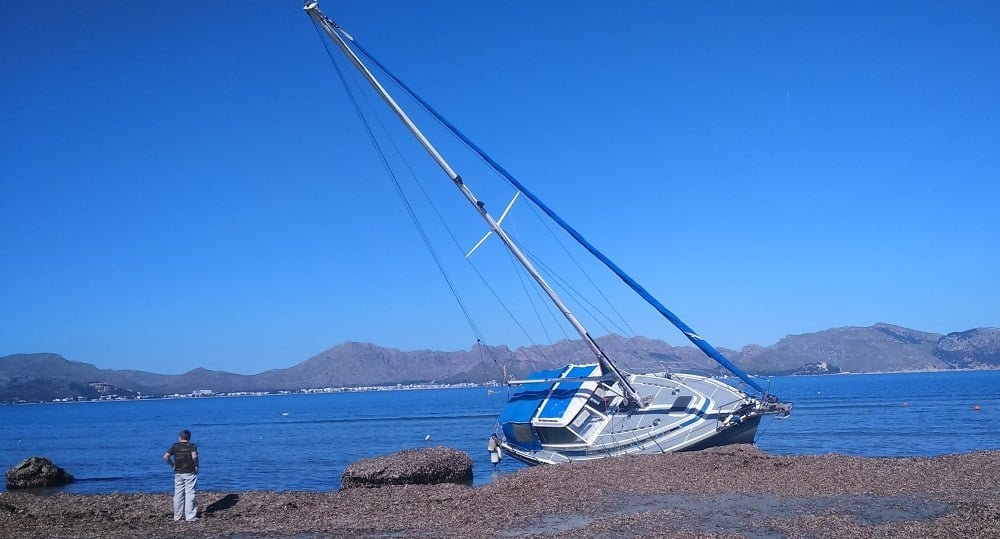 Boats of different size were beached and spreaded all over the shore, some of them damaged on their hulls, keels and even on their electronic appliances which seawater had flooded Lesson learned the hard way. If you have a boat or a sailing boat and you are moored off the yatch club, keep always aware about weather forecast and possible weather changes. At the end of summer in Mallorca, though it is not frequent, storms, can bring unpleasant surprises.
Kitesurfing during storms, is neither a good idea as strong winds will put you at risk, which, if we think it over, it should be perfectly avoided.

Kitesurfing it’s a risk sport, let’s be ourselves who decide the level of risk we want to deal with. Kitesurf safe and … if you own a boat, visite the weather forecast sites and remember, it is always better to prevent than to cure.