In this entry to the kiteblog of our kite club/ Kite school KITESURFING MALLORCA we will facilitate you the wind info in Mallorca through the different seasons and most important links in terms of updated wind conditions and webcams on the island.

• With more than 300 days of sunshine per year, Mallorca Island has the ideal conditions for kitesurfing.
• Between the months of March-June, the prevailing winds are from the North, West and Northwest -consider the arrival ot thermal breezes from April until end of August which on the Bay of Pollensa arrive from East-North-East
• September-October and November-December are months is which thermal winds are over and the island is submitted to occasional South and South West winds alternating with calm days and occasional storms from Southeast on Nort and Norteast but this last ones more seldom.
• In summer, but frequently starting already by end of March beginning of April, thermal breezes dominate the northern and southern parts of Mallorca. This is the famous Embat in the Bays of Alcudia and Pollensa in the North of the island and also on Palma Bay.
• Best months April to end August 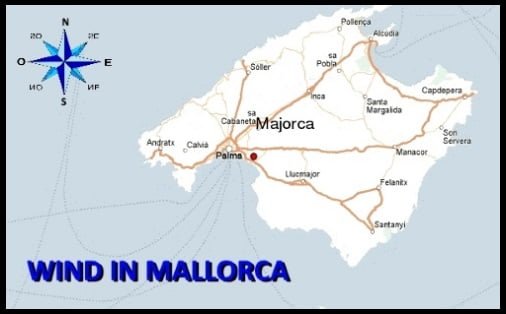 Winds in Mallorca through the year

Wind and weather in Mallorca

In general, once the thermal winds -Embat- end by mid September are mostly expected very light winds.
Sept-Oct-Nov and December,January and February there are calms with some occasional storm, some of them violent storms of short duration until Mid March or April, when Mallorca thermal winds start again.

If planning kitesurfing during mid September until beginning of April you should be resigned to calm windless periods and only updated weather conditions may give you a chance of a succesful kitesurfing session occasionally.

In fact, there’s basically almost no chance to learn kitesurfing from October until March, mostly due to poor and unreliable wind conditions and occasional storms.

By clicking on the different links under these lines we will have access to information. It is also important to contact our school to confirm the direction and force of the wind in the various kite spots on the island.