The following report, brief but important, comes from several sources that I have collected and through which I will try to give a small idea of how the atmosphere works, mainly in its lower layers.

This affects the consequences that this has on time -current measure- and climate, -global measure- and indirectly, also on kitesurfing in Mallorca.

It is interesting to know the functioning of the atmosphere and of the meteorology that is the science that deals with it and its details, since its understanding brings us to understand why it happens what happens and thus make better use of that information for our kitesurf navigations and even for the knowledge of how it will affect the waves that can reach our coasts.

About what we are most interested in: the wind

The wind consists of a mass of air that goes from a place of higher pressure to another place of lower pressure. To measure the wind, what we want to know first is its speed, which will be higher the greater the difference in atmospheric pressure between these two points. 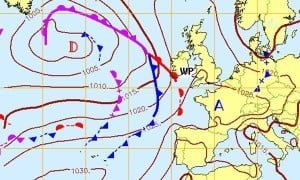 Wind is measured in meters per second or kilometers per hour. And its direction, which is where the wind comes from, is expressed in degrees, counted clockwise from the geographic North; N is assigned the value of 0º or 360º, East 90º, South 180º and West 270 degrees.

There are several causes that can cause the existence of wind, but normally, it originates when between two points a certain difference of pressure or temperature is established.

In the first case, when between two zones the air pressure is different, it tends to move from the high pressure zone to the low pressure zone. In the atmosphere, there is a direct relationship between pressure and wind, which makes the isobar maps, which represent the values of atmospheric pressure, provide us with valuable information about wind speed and direction.

In the second case, if a thermal difference is the cause of the origin of the wind, what happens is that when a mass of air acquires a temperature higher than that of its surroundings, its volume increases, which decreases its density. By the effect of the flotation, the mass of hot air will rise, and its place will be occupied by other masses of air, which in their displacement will cause the wind.

This is directly related to our “embats” or thermal winds, which coincide with the best time of the year both to learn kitesurfing and to practice it. You can also practice -that barely or very seldom learn- outside the thermal season between October and the end of March, but the conditions are not going to help.
Periods of calm and some storm and, yes, many days of cold.

Still, Mallorca is located in a windy area, since we are far from the constant trade winds and contralisios, and the average speeds rarely exceed 50 km / h, although in some occasions there are gusts of over 100 km / h.

But the “magic ointment” of Mallorca are its thermals that are quite predictable, soft and almost daily for six months of the year. Long live thermals!

And in the link under these lines we will see about some more particularities and effects about wind and meteorology.