Why a kiteblog entry in a webpage which name is Kitesurfing Mallorca is starting with the title: Fuerteventura kitesurfing – Cofete?
The reason is double, it tells about a huge beach, something that a Mallorcan kiter definitely longs for and also a mixture to 50% of the mystery that surrounds that particular beach and also why in spite of the great space that Cofete offers, is not really a convenient kitesurfing destination.

It si not gold all that glitters … goes the saying.
There are beaches in appearance which invites you to think you’re going to have a great kite session

It is our beach spectacular, huge, deserted, with a good amount of sand, comfortable temperature, waves, well … everything looks fine. At first sight, at least.

Situated in the desertic west side of the island of Fuerteventura, in the peninsula of Jandia , our beach has an extra plus, to be so isolated and deserted: it is quite difficult to access it and certainly it is rather far from civilization … for european standars of difficulty, of course. This is not as crossing Sahara desert, of course. 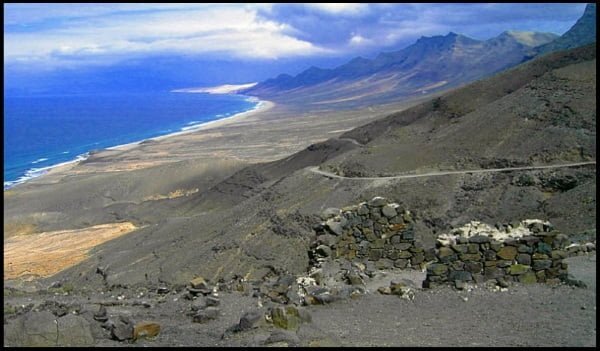 In fact our beach, this kite blog beach, is a secluded beach,if it was not for the occasional visite of “the adventurer tourist” type which often relies on the support provided by a normal vehicle.

To get there, you have an approximate 30 minutes of an unpaved road, just a dirt track, stones and plenty of dust.
On this road, most of rental cars insurances do not cover you.

That is, if you have decide to rent a car when instead of luxury and a powerful engine, you prepended more elementary issues, such as not paying more than necessary and just be able to go from one place to another without having to be constantly concerned about the good health of the vehicle, that is, if something bad happens, with the lost of the initial cash deposit of the rental, the rest of the damage would not be covered by the rent-a-car insurance.

Risking to damage the car on the dirt stoney track road, could force the rent-a-car company, most likely, to crucify your credit card, therefore, opting to rent a 4×4 will make it definitely easier and safer to arrive to Cofete.

What is then what would make our beach being interesting for kitesurfing and which would be the cons?

The reason to try kitesurfing there, I told on the beginning: plenty of free space, a huge sandy beach and the feeling of isolation, far from crowds of kiters and the constatation that you are just one more in the water.  If Cofete should be kiteable, you should feel as a sort of Robinson Crusoe of kitesurfing.

But, which are the reasons not to enjoy a kitesurfing session in Cofete? Sharks? Rare lurking creatures in the water? … No, it’s not that. What’s the problem then?  For our beach, the main problem is: Currents

In fact, in addition to strong and dangerous currents on our beach, Cofete,  we should add the breaking waves issue.

https://www.youtube.com/watch?v=1HU0RDc5g1c
Powerful currents and no rescue service in Cofete
don’t take chances and don’t swimm there

About the third row of breaking waves, often, is quite devastating, tube type of wave and of considerable height, and wind, to tell the truth, neither does not help much, because when is blowing, it blows rather straight onshore.

Or, in other words, too many breaking waves for the given wind force and direction.

https://www.youtube.com/watch?v=OxsiTyperIQ
This are Cotillo waves, imagine similar waves in Cofete,
both in the west coast of Fuerteventura

a winter day in Cofete, wind from Northeast leaves the beach windless

Depending of the wind direction, Cofete, which as I said is situated in the west coast of Fuerteventura, is not suitable to the Northeast, East and South winds.  During Autumm and Winter time, being the dominant winds the Northeast Trade winds.

During winter time, Cofete is not receiving wind -offshore direction- if except in some West or Southwest wind periods of few days to a week duration, happening mostly if ever, around December, as exception to the dominant winter trade winds.

Therefore, considering that when in Gran Canaria, by instance, when the wind is from North or North-northeast, which is happening from March-April to end of August, in Lanzarote and Fuerteventura, the dominant wind direction or summer trade winds is West-Northwest or directly Northwest.

This are the most suitable wind directions for kitesurfing in Cofete but never ignoring the hazardous currents and the breaking waves issues.

Someone who has tried to kite there, if for what you may find on the web, there are just a couple of pics and the youtube video up here, though, as we can see, there was not much success in his navigation.

Probably due to the lack of familiarity with the waves and also there was not much wind, just barely enough to start his ride but not to cross the second and third line of waves.

Other than that, a couple of friends of mine who were there long ago but did not dared to try because they also lacked kite size, more than this, it is is an enigma, no more news of other kiters who went there and succeeded.

Cofete and how to get there

Map and photos of the way
http://www.dangerousroads.org/europe/spain/2659-carretera-de-la-playa-de-cofete.html

The mysterious side of Cofete beach

However, the beach, apart from its undeniable aesthetic appeal, it also has its share of mystery. And that is because the legend about the only building that exists throughout the length and breadth of that beach.

The Winter villa. Dilapidated now but the house it is in worse shape that its legend anyway

The villa Winter, was built and inhabited by a german national, apparently in the final years of World War II and the house and the area was rumored it could have been a source of refreshment and a hidden military base for submarines of the Third Reich.

In the following links you can see the story about it.
The most comprehensive website on the villa http://www.villawinter.com/espanol.htm
Some more info about the villa http://forum.axishistory.com/viewtopic.php?f=61&t=7143

And, not too far from that area of the island, a few tens of kms further up and in a space of coast, also with difficult access, another story took place, if not as much mysterious as the previous one, at least more romantic.

The beach where one of the largest ever built, and the American Star got wrecked and agrounded. today, the hull of the wreck, practically almost disappeared due to strong waves and the passing years.

The following links some history about it.
http://www.explorermagazin.de/fuer04/fu04amstar1_e.htm

All this story, in fact, besides offering us a bit of mystery, beautiful landscape, a long broad beach and its convenience -or not- from a kitesurfing point of view, comes to reinforce our decission to bring our Mallorca kite school in winter to Vietnam.  Looking for the broad open space, for the nice breaking waves and not dangerous currents by the way.

Visite our winter kiteschool web page and get informed
about the Vietnam kitesurfing “pearl” which is Vung Tau.