Accidents of kitesurfing. Okay, definitely it sounds scary, nobody wants to suffer a kitesurfing accident.
I suffered a small accident the other day. Actually it was not so serious … but it could have been.

THE KITESURF AND THE SHORE

Yesterday I fell while kitesurfing. Probably many people fall every day, nothing happens most of times, but, hey! this is me! a guy that kitesurfs since 1997. I think I gather enough experience to don’t commit such silly mistakes. Shame on me!

But yesterday I fell while kitesurfing. I did not lose control of the kite, it was not the big accident, but it could have been.
Many people fall also kitesurfing, nothing happens most of times, actually, it depends of where you are falling, of course …

What happened is that … yesterday it was me who fell when I was kitesurfing, and that was due because I came so close to the shore that, the bottom of the board, probably the  middle fin which is the longest – I was riding on the 160×44, which has a special middle fin a bit larger than the other 4 fins at the tips of the board but this one it’s a special board to ride upwind even in the ligthest breeze-  was the cause of the accident.

Avoid riding too close to the beach

Nothing really serious happened. Well,  it actually did, not so serious but could have been.
I twisted my left ankle a bit, thanks that I was riding not too fast in this moment neither.

More than anything, what happened was that the wind was sort of agonizing for moments and to not lose my track and get downwinded, I abused of my luck and I ended riding too close to the beach.

This, at the same time that I was trying to avoid the number of kiters who spreaded all over the area, standing in the middle of the way with their kites at the zenith.

And as I approached the beach more than necessary and without even having reached it, while trying to avoid the guys with their kites up on the air, motionless, just obstacles who shouldn’t be there but trying to ride or landing their kites on the beach again, My fin got stuck on the sand.

Their main problem of most kite fellows is the size of the kite they use- almost unanimously thet have 12 mts kites and too small kiteboards  for the average wind force, which makes the chance of success eventually a lot smaller, but the problem in fact starts from the fact that unfortunately, after ending their kite courses they got poorly adviced by the kitesurf shop owners and they propose them boards on the range of 135 or 140 cms, when they should be trying on 160 cms boards which would simplify things greatly, this, at the same time that trying 12 mts kites when for the average thermal breeze at Pollensa Bay should be on 14 or 15 meters size for a more than evident better outcome.

Therefore I trusted myself unnecessarily and I got stuck on the sand so the board stopped and I was forced to fly forward. and so, I had stumbled and run few meters until I fell. I didn’t lose kite control, but still I felt as a complete fool.

The wind wasn’t barely reaching 6 knots on the shore, and perhaps 100 meters further out, 8 knots and sometimes  10 kts.  So, for my lack of prevision as I approached too much the shore … got stuck and hurted lightly my ankle

I already said, it was nothing serious, that’s it, The board was stuck, it stopped abruptly onmy track and I flew forward, I landed in the sand, three or four meters away and that was it.

I managed to control the kite, but … and what if I had not? … what if I had failed and got dragged downwind? … mmm … bad! … very bad!. Learn from the experience!

I stood up, surprised … and humiliated. I walked a few meters, got back again on two palms of water and start ridin g kitesurfing towards where I had come, upwind and avoiding “the human pine trees”  thanks to my Flysurfer L board 160×44 cms and my incredible Sonic FR 15 mts I gained high enough on my track in a couple of minutes to kept my session, this time not getting closer anymore to the 100 meters invisible line from the beach anymore but enjoying the 2 extra knots that were blowing on the outside.

On account of the previous situation: Do not even think riding near the beach while kitesurfing, there’s no need to take the risk
If it is necessary to change direction, to do it without hesitation, if possible at least 50 meters from the shore, the nearest or even better the 100 meters from the beach. The further, the safer!  For both reasons, both obvious.

1 / .. Because what happened to me, could happen to anyone but maybe with less luck: loss of control of the kite and finish crashing it on the road, which is not so far from where we start our rides or as a lesser problem, being able of controlling the kite in extremis, but twisting badly my ankle.

2 / .. For the unpleasant possibility of receiving a fine of 3000 euros, if the “Pafite” -Territorial Fiscal Police patrol of our beloved Guardia Civil- had witnessed what happened. The law is clear about it. Even though there were not swimmers or other beach users having a walk on the water but just people kitesurfing. Don’t ride but 200 mts from the shore, if there are buoys marking the area, even more compulsory but if not buoys, common sense should always prevail in this situations. 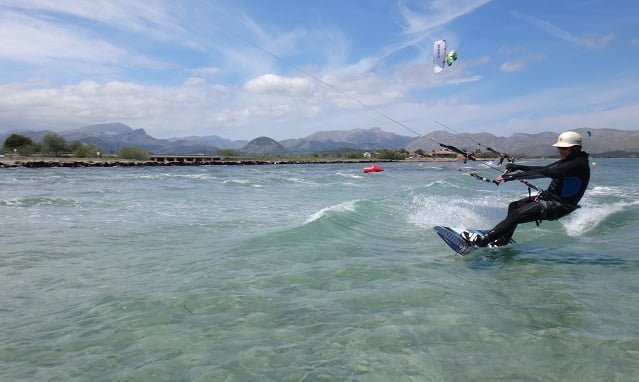 The photo above, shows me losing speed as I get closer to the shore

What has been said: Do not ride so close to the beach, that you can get stuck in the sand with the fins of your kiteboard.
We must always turn and get away from the shore with enough space and … nothing justifies doing anything other than that.

A video of the happy moment in which I reach planning in the 6-8 knots, but better slowing down and riding away from the beach before arriving at the shore.